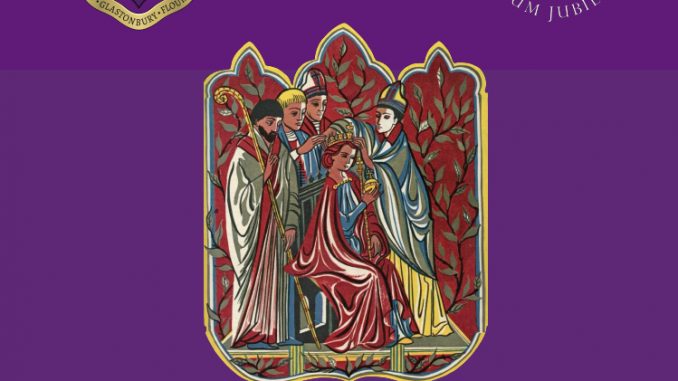 With an overarching theme of ‘Avalon of the Heart’, there will be year-long celebrations in Glastonbury – reflecting the celebrations throughout the United Kingdom, the Commonwealth and around the World – reaching a peak with the Queen’s Platinum Jubilee Central Weekend; a four-day UK bank holiday weekend from Thursday, 2nd to Sunday, 5th June.

Our programme of events tie Glastonbury’s past and present together as we celebrate our unique Royal Heritage, which includes King Arivargus’ grant of the 12 Hides, King Ina’s Charter and those of successive Monarchs – through which Glastonbury epitomised a truly independent ‘First Estate of the Realm’ – with the significant mediaeval Royal Visits of Edward I and Edward III respecting the primacy of the Holyest Erthe in Englande, renowned as the site of King Arthur and Queen Guinevere’s tomb, the burial place of Saxon Kings, Edmund I, Edgar the Peaceful, and Edmund Ironside.

It’s going to be an extraordinary year! May Glastonbury Flourish!

2pm & 9pm – Jubilee Proclamation. The long Bank Holiday Weekend celebrations open with a Procalamatiojn by the Town Crier at 2pm at Market Cross and 9pm prior to the lighting of Glastonbury’s ‘Platinum Jubilee Beacon’ on the Tor.

9.30pm  Tor Beacon Lighting at 9:30pm following a short ceremony at the top of the Tor. Space on the Fairfield is being made available for those who do not wish or are not able to climb the Tor. 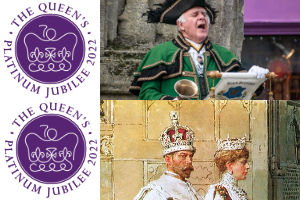 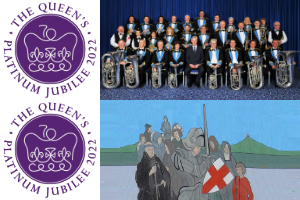 3pm The pageant will conclude in Glastonbury Abbey, where you’re encouraged to bring your own picnic and the celebrations will continue from 3pm with Glastonbury Brass Band, the newly commissioned Glastonbury St. George Mummers Play and Children’s entertainers from Children’s World. Last admission to The Abbey is 5:15pm and will close at 6pm.

10.30am Civic Parade & Church Service
The day will open with a Civic Procession from the Town Hall to St. John’s Church, where a special Platinum Jubilee Service takes place at 11am.

Schedule for Avalon of The Heart Platinum Jubilee Long Weekend (002)