Glastonbury’s famous 10th century Abbot, Dunstan was both a Saint and Archbishop of Canterbury. His coronation of King Edgar is particularly pertinent in this prestigious year, as it provided the template still in use when Her Majesty Queen Elizabeth II was crowned on 2nd June 1953 in Westminster Abbey.

To honour our Glastonbury Saint, Glastonbury Town Council are hosting the following Free Events as part of our ‘Avalon of The Heart’ Platinum Jubilee programme.

1 pm – screening of ‘A Queen Is Crowned’ the official film record of the Coronation, narrated by Sir Laurence Olivier.

7 pm – a reflection by Paul Weston on the St. Dunstan and the Glastonbury ‘Jubilee dynamic’.

“Since last autumn, groups of people have met in the Abbey to acknowledge its history on relevant dates, including the martyrdom of Abbot Whiting.  This generated a momentum focused towards the feast day of Dunstan.  Paul will discuss the core Saxon period of his activity amongst a host of other topics, including the children of King Edgar, the remarkable family tree that sprouted from Edmund Ironside, and the great cycles of history that give context to the Abbey story.  The ‘Pax Cultura’ of mystical artist Nicholas Roerich, the Alice Buckton pageant, and the contentious methods of archaeologist Frederick Bligh Bond complete an ‘Avalon of the Heart’ evening to lead us towards the core of the Jubilee”. 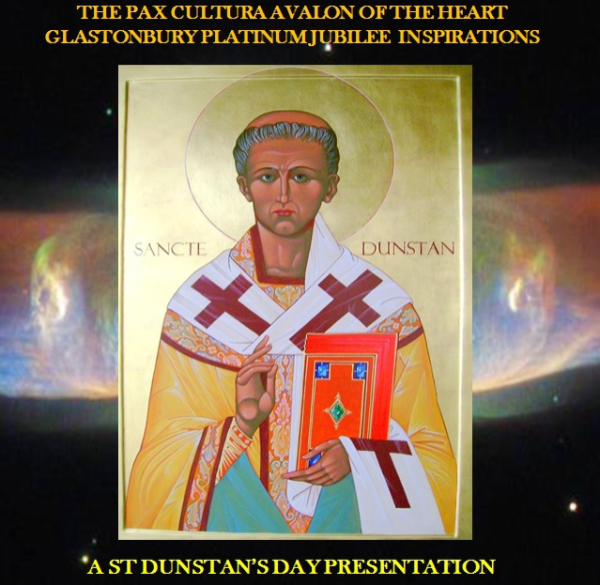